INT. MY BRAIN — 35 YEARS LATER
Wishing Director Art Linson followed Briggs and Young rather than Murray and Boyle for the remainder of the movie.

Murray is fantastic, but the screenplay was so scattered and light on plot that every ounce of manufactured chemistry between Boyle and Murray is wasted energy. 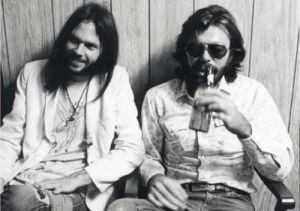 Young and Briggs had just as good of a shot at tapping into the Gonzo zeitgeist that embodied Thompson and his real life attorney, Oscar Zeta Acosta.

Their origin story is rooted in that same freewheelin’spirit, when Briggs picked up Neil hitchhiking in Topanga Canyon in 1969. The kindred spirits hit it off, and Briggs ended up producing many of Young’s best albums.

His low-tech streamlined recording process was a huge influence on Young, and Briggs often pushed Neil to his limits in the studio. “When you make rock ‘n roll, the more you think the more you stink.” said Briggs

“When not working, David Briggs enjoyed reading books, chasing beautiful women; driving fast cars; going to Las Vegas; insulting managers, lawyers and record executives; and a number of other endeavors ill-suited for publication,” according to the “official” Neil Young biographer, Jimmy McDonough, in an obit in the Los Angeles Times.

Shout out to IMDB Trivia page for the cameo nugget.