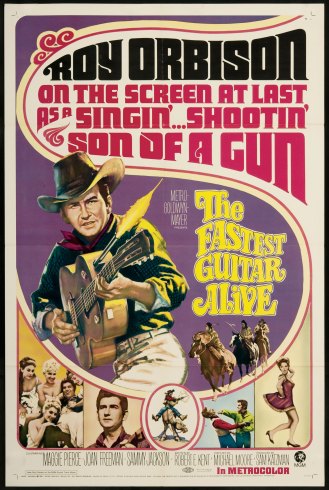 If you are like me, you have lived your entire life unsure as to if Roy Orbison was blind or not.

That being understood, learning that Orbison was cast as a sharp shooting ace in a 1967 MGM Western was a revelation.

The Fastest Guitar Alive tells the tale of Orbison’s Johnny, a Civil War era confederate spy/troubador, singing and shooting his way through a mission to steal some Union gold with his futuristic guitar-rifle.

I’ve read that MGM was so hot to recreate the success that they had with putting Elvis in the movies that they signed his Sun Records peer, Orbison, to a 5 picture deal.

The deal was quickly rescinded upon the lackluster critical and box-office response to The Fastest Guitar Alive.

Orbison’s lack of on-screen charisma must have been extremely apparent to the Studio, because you will notice that there is not one single line of dialogue from their top billed actor throughout the entire trailer. That has got to be a first.

The soundtrack was a scant 7 songs, but definitely had a few standouts.  “Pistolero,” and the “There Won’t Be Many Coming Home,” which was brilliantly used in Quentin Tarantino’s “The Hateful Eight.”

Roy Orbison – There Won’t Be Many Coming Home