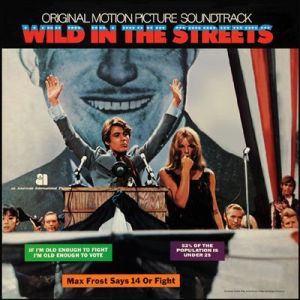 American International Pictures was on point when they churned out Wild In The Streets in 1968.  Shot in just 15 days, the movie tapped into just about every aspect of the counterculture climate, and produced a decent soundtrack to boot.

The exploitation flick features Christopher Jones as Max Frost, a rock star who becomes President.  Max runs on the platform of lowering the voting age to 14 and forcing anyone over the age of 35 into internment camps, where they are fed a steady diet of LSD. It’s also worth noting that a young Richard Pryor plays the drummer Max Frost’s band.

While the movie is obviously a farce, the soundtrack is a somewhat relevant look at the homogenized sitar laden psych-pop faire that was popular at the time. Tune in Troops!

The Shape of Things to Come – The 13th Power

Wild In The Streets – Jerry Howard