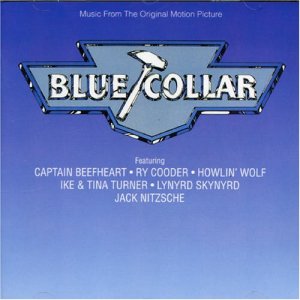 A plan is hatched.

(Side Note: It’s really hard to come up with a clever intro to a Blue Collar post when Patton Oswalt destroyed all past and future Blue Collar lead-ins with this post back in 2009.  Oswalt also points out that the Auto Plant depicted in the film is manufacturing the same model Taxis that Travis Bickle drove in the Schrader penned Taxi Driver, which is an awesome notion to fancy.)

While the safe heist yields some complicated results for our working class heroes, composer Jack Nitzsche and his studio cronies put together a straightforward cohesive soundtrack with very uncomplicated results.

It opens with arguably the most straight forward Captain Beefheart track that’s ever been recorded, as he does his best Mannish Boy vocal over the rhythmic crunches of an automobile assembly line and Ry Cooder’s swampy guitar licks.  “Hard Workin’ Man,” which is the main title music to the film, is pretty much your thesis paragraph that strings together the entire soundtrack, which is a well sequenced playlist of transistor radio rhythm & blues with a dash of swamp rock.

“Party” is one of the Nitzsche compositions, and is pretty smooth blend of swamp and yacht, and could be one of the first signs of the “overproduced blues” trend of movie themes that flooded 1980’s buddy flicks (we will get to that someday, but think Midnight Run, Lethal Weapon, et al).