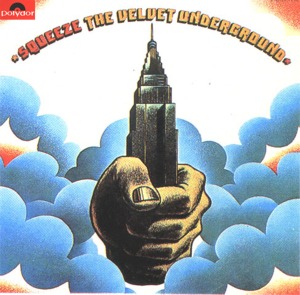 New Category Alert: Though it sounds like a Slanted-era Pavement song title, Ex-Holy Grail spotlights a once out-of-print artifact, now rendered pedestrian due to the digital age we live in.

Apparently every written documentation of this record is legally obligated to write the following line verbatim: Squeeze is a Velvet Underground album in name only.

The 1973 follow-up to Loaded featured not a single founding member of the Velvets.  Lou Reed left, and Sterling Morrison and Mo Tucker soon followed suit.  Multi-instrumentalist Doug Yule had the name all to himself.

In a pre-internet age, word of Squeeze was like a Record Store Clerk Tall Tale: Paul Bunyan, Pecos Bill, and an Out-Of-Print, Lou Reed-less Velvet Underground record that was never even released in America! Can you imagine?

Fast forward to the mid-nineties and the revelation that was Yahoo Search, and intrigue grew as we got to actually lay our eyes on the artwork for Squeeze.  It was even reminiscent of illustration for Loaded, same graphic illustration style also featuring a New York City based landmark enveloped by billowing energy.

Today you can listen to Squeeze on Spotify in all it’s mediocre glory, and while calling this your favorite Velvets record would be like calling Bob Weir’s “Good Lovin’” your favorite part of a Grateful Dead set, the album is interesting if only that it retroactively illustrates what Yule brought to it’s predecessor.

Before hearing Squeeze, one just assumed Lou Reed single handedly shape-shifted his usually complicated, personal, and din-soaked tunes into the simple, loose yet confident jams that made up Loaded.  The story goes that Mo Tucker was on maternity leave, Sterling Morrison went back to school at City College of New York, and Yule was Reed’s studio partner in crime, but ultimately that story was just liner note fodder.  Squeeze highlights what Loaded would have been without Reed’s genius, which is a collection of mid-tempo rockers with no soul, swagger, or lyrical depth.

Conversely, Yule’s work on Squeeze also highlights what Loaded would have been lacking without Yule.

Yule was the anti-John Cale.  Where Cale channeled the avant stylings of La Monte Young, and stoked Reed’s dissonant side, Yule brought basic chord progressions and poppy background harmonies to the table. This shouldn’t be underestimated.

Reed’s self-titled solo LP is full of studio musicians that often overplayed their parts and added of texture to tracks that didn’t need any. Yule was the centered middle ground that tempered Reed’s eccentricities, and netted a masterpiece.

You have to hand it to Yule for giving it the old college try on Squeeze, but unfortunately he was on the wrong side of rock history by carrying on with the Velvet Underground moniker.