One of my favorite Saturday Night Live sketches is called The Gross Out Family. In it, Tom Hanks sits down to a family dinner and discovers that the milk has gone bad.  Rather than just take his word for it, the rest of the family are compelled to taste the rancid milk to confirm just how awful it is. The sketch builds upon that premise, and we see Hanks and family (Jan Hooks, Mike Myers, Julia Sweeney and Chris Farley) go on to touch Chris Farley’s post work-out sweaty belly, sniff a very full litter box, and test out a loose step that sends them hurtling down the basement staircase. They just can’t help themselves.

In my second consecutive Kinks post that starts out with an ill advised analogy, I will now throw myself down the staircase of what most consider The Kink’s most difficult and overindulgent period. The RCA years. A phase so infamous, that there was allegedly a clause in their subsequent contract with Arista records that barred Ray Davies from turning in any concept records. I can’t help myself

The particular RCA window I’ve recently narrowed in on I will call Ray Davies’ “Starmaker” phase, which consists of Everybody’s In Show-Biz (1972), Star Maker, the 1974 Teleplay produced for English Television, and Soap Opera, the 1975 studio expansion of the teleplay.

Everybody’s In Show-Biz is widely known as a jumping off point for most casual Kinks fans, for it’s when Ray Davies started overtly shifting his songwriting styles to fit into the constructs of the more elaborate rock operas that would follow in the wake. While it might not put forth the cohesive narrative that would go on to inhabit Preservation Act I & II, Soap Opera, or even School Boys in Disgrace, Show-Biz sets into motion the main themes that would serve as the backbone Star Maker and Soap Opera:  the allure of fame and the monotony of real life. In the case of Show Biz, the monotony of life as a touring musician.

Show-Biz is a double LP that set consists of one studio album, and one live album, and if you squint really hard, it kind of works as a concept album within itself: a band on the road, and a band on stage.  Thematically the studio portion focuses on the excess of life on the road, the bad diets and road weariness of “Maximum Consumption,”  “Motorway,”  and “You Don’t Know My Name” to the sublime masterpieces “Sitting In My Hotel” and “Celluloid Heroes” which focus on the more fragile and isolated nature of fame.

Despite the many standout tracks on this record, it’s clear that the form is starting to outweigh the function here, and that Ray Davies’ is more interested in indulging himself in varying genre exercises (think Dance Hall, Tin Pan Alley, even Canned Heat style flute jams) then following any sort of 70’s rock handbook that his peers were reading. The preceding LP, Muswell Hillbillies, was a very well executed genre exercise in itself, but on Everybody’s In Showbiz you get the feeling that Ray’s self-editing skills are starting to deteriorate.

The live set, recorded at Carnegie Hall on the Hillbillies tour, acts as another reminder of where the Kinks were heading.  Long gone are the garage rockers and posh poppers of the their early catalog, and in their place is a Ray Davies’ led Vaudeville Show, complete with sermons, parlor songs, and dance hall brass section.

Fast forward two years later, and it’s no surprise when Ray has crossed over to full camp mode for the 1974 Television Play Star Maker. He is in character, and full Elvis regalia, as a fictional rock star named Starmaker, who has taken it upon himself to try and turn an ordinary man into a celebrity. 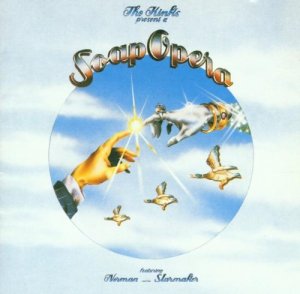 The live musical, complete scene changes, backup dancers, and the remaining members of the Kinks demoted to anonymous backing band, was filmed live in front of a television audience, where a cheeky Davies regularly breaks the fourth wall to update the audience on his plans to live as an ordinary man in an effort to turn perils of a droll life into a hit song.

“I need a challenge to bring out my best work,” Starmaker tells the audience.  One can’t help but wonder if this art imitating life for Davies. It’s almost a meta, as Davies now needs to build these elaborate storylines and characters in order to write his own pop songs. Which kind of makes sense, considering his existing resume.

In his somewhat short tenure as a rock star, Davies had already covered quite a bit of ground. “You Really Got Me,” is basically the title track of the British Invasion, “Waterloo Sunset” showcased his knack for tossing off the perfect pop song, and he practically perfected Twee music with “Sitting In My Hotel,” but if the RCA years show anything, it’s that Davies thought in big storylines, and outside of The Who’s Tommy, there wasn’t necessarily a blueprint for him to follow at that point in time.

Starmaker was Ray Davies’ Ziggy Stardust, but unlike Bowie, who could seamlessly cultivate and shed alter-egos with ease, Davies was a little more of a meat and potatoes guy. Maybe it was his working class upbringing, but Davies couldn’t assume these fictional roles with the savoir-faire that Bowie could, nor could he embody these characters as loose ideas or concepts as Bowie could. Davies needed the full constructs of characters, plot, and ultimately narration to beef up his concepts and stay interested in songwriting. This predicament becomes painfully to the surface on Soap Opera.

Outside of the opening track “Everybody’s A Star,” this album is a tough listen. Sure Pete Townshend’s rock operas also lament the dregs of British working class, but the difference is that Townshend and The Who are able to harness that contempt into something larger, bombastic, and ultimately carthartic.  On Soap Opera the Starmaker character gets swallowed by the lowlights of his subject’s uninspired life, and the music itself reflects that. Mid-tempo showtunes and waltzes that ultimately suck the rock out of the rock opera.

If you are a casual and curious Kinks fan, I would recommend Everybody’s In Show-Biz.  It’s not a perfect album, but has some gems.  But do yourself a favor, outside of watching the posted clip above, beware of the Chris Farley belly sweat of Soap Opera.