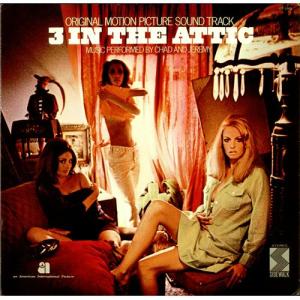 Sticking with American International Pictures, purveyors of low budget drive-in faire, and turning my attention to their 1968 release Three In The Attic, which seems like their bizarro answer to The Graduate.

Wild In The Street star Christopher Jones plays Paxton Quigley in this story about an undergrad lothario at a small liberal arts college that simultaneously holds affairs with three co-eds. The females ultimately catch on, and in an effort to teach him a lesson, collude in holding him captive in the attic of a sorority house for days on end without food or water,  just rotating shifts of punishing intercourse.

Enter Chad & Jeremy. The folk-pop duo were most likely AIP’s low budget answer to Simon & Garfunkel, but ultimately a silver lining to this entire production.

Though credited to both Chad and Jeremy, most likely for marketing purposes, Three In The Attic is primarily a Chad Stuart affair. Reeling from two consecutive flops, Of Cabbages and Kings (1967) and The Ark (1968), in which the duo had eschewed it’s single oriented folk numbers for the more en vogue psychedelic full lengths, Chad & Jeremy had all but disintegrated. Stuart, an arranger by trade, was so anxious to score a film that he started this project sans Jeremy. The score is so chock full of timpanis, flute suites, string arrangements, horn sections and sitar solos, that it’s clear that Stuart wanted to flex his composition muscle to the fullest.  He even brought Jeremy around for Paxton Quigley Had the Course, a track that would end up being be the final Chad & Jeremy collaboration of their heyday.

The real treat here comes in the form of “Paxton’s Song (Smoke)”.  A psych-folk ode to young love that layers a really strong arrangement to a wistful melody. You’ve got to hand it to Stuart for making an earnest go at scoring an overtly gratuitous b-movie and actually trying to penetrate the psyche of it’s vapid protagonist. Bonus awkwardness comes mid-film, in the form of Christopher Jones actually singing the refrain to one of his conquests.