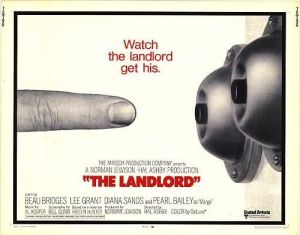 After years of hearing about this film, and years of owning to the soundtrack, I recently had the chance to watch The Landlord.

Hal Ashby shines as a first time director, guiding a baby faced Beau Bridges as the aloof socialite manchild that is Elgar Enders in this 1970 black comedy. Elgar buys a tenement building in Brooklyn’s “ghetto” Park Slope (!!!) and plans to gut the place and evict his tenants. During the process Elgar gets to know the tenants, love affairs happen, empathy occurs, and his master plan quickly unravels.Using some of the cultural touchstones that he would later exploit in Harold And Maude, Ashby somehow transforms what starts out as a straight up satirical comedy about family, classism, racism, and colorism, into a touching drama about an extremely entitled young man finally taking responsibility for his actions. This film easily ranks up there with Ashby’s best.

I first heard about this movie about a decade ago, via the incredible Brooklyn Public Access show Rare Groove Revolution. A fantastic show in which two crate-diggers would sit in front of a black backdrop, and listen to and comment on obscure records. It was like Charlie Rose for beat-heads. They couldn’t say enough about the breakbeats on this Soundtrack.  Overall the record is a well balanced showing of rock, break beat funk, 70s party music, and even moments of theremin driven ambiance. It all makes sense within the context of the movie. Side A opens with the white bread ‘Elgar Version’ of “Brand New Day” as sung by Al Kooper, and the b-side opens with the same track sung by the Staple Singers, in a nod to the tenants.

“Love Theme” packs alot of ballad in it’s three minutes. It starts with Kooper singing about Elgar’s journey into manhood and ends with some pretty tasty guitar work. “The Landlord” is worthy to be part of Blue Note’s Rare Grove Series. It was sampled by DJ Shadow on his Preemptive Strike track “The Hindsight”.