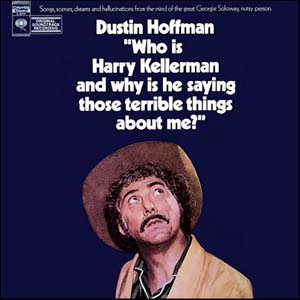 Dustin Hoffman plays Georgie Soloway an extremely successful songwriter (a rock n’ roll Burt Bacharach?) who is ready to end it all.  The opening scene of the film finds Georgie editing his suicide note on the balcony of his palatial Manhattan penthouse apartment, and from there we follow him through an hour and a half long fever dream of paranoid encounters, private plane rides, childhood hallucinations, and psychiatrist visits as he recalls his past and tries to figure out why the mysterious Harry Kellerman is sabotaging his reputation.  The film comes off almost like Wild Strawberries seen through a trippy Charlie Kaufman-like filter, and is pretty well executed, despite Hoffman’s protagonist being pretty unlikable. Additionally, there are some really nice showings by Dom DeLuise, Jack Warden, and Barbara Harris.

Kellerman is an important movie, however, for no other reason than it was instrumental in getting Dr. Hook & The Medicine show a record deal.  You also get to watch Dustin Hoffman and Shel Silverstein front the band in a performance that was filmed live at the Fillmore East, prior to an actual Grateful Dead show and before actual deadheads circa 1970. (On the day Jimi Hendrix died.)

Shel Silverstein, who was a longtime fan of the unsigned band and tasked with writing all of the songs and lyrics for the film, recruited the band to be the perform his “Last Mornin'” and “Bunky & Lucille” for the soundtrack, both tracks exist only on the OST.  A more refined version of “Last Morning” was later re-recorded for their album Sloppy Seconds  but lacked the immediacy, and rolling guitar lick that makes the movie version soar. After this relationship was consummated, Silverstein and Dr. Hook went on to make chart magic in the subsequent years.

Went down a big time rabbit hole after the Kellerman viewing.  Simply amazed at what a renaissance man Silverstein was, they don’t make guys like him anymore. He was like Rod McKuen for the Village crowd. Below are some highlights from my recent Hook/Silverstein bender. Enjoy!

Will Sheff on Dr. Hook Live DVD from 1974
Long read from the Okkervil River singer/songwriter.